The Voices of Our Missing Allies

Afghan women are fighting for their future once again. And not just for their freedom, but also for their survival. Armed with the courage of desperation, they are appealing to the world not to put our trust in the new Taliban regime. Following years of war and terror, the last twenty years had provided women a window of opportunity into a previously unimaginable reality. With the abrupt demise of the Afghan government, however, this window has been shut, leaving women to face an old world of tyranny they thought to have overcome. The return of the Taliban has covered the country in a veil of fear and terror. The women of Afghanistan are now being left out, left behind, and locked in.

This campaign is an appeal to all of us not to recognise the Taliban and its misogynist, fundamentalist regime. The graphics in this campaign represent the closing curtain on a just and equal future for women in Afghanistan. 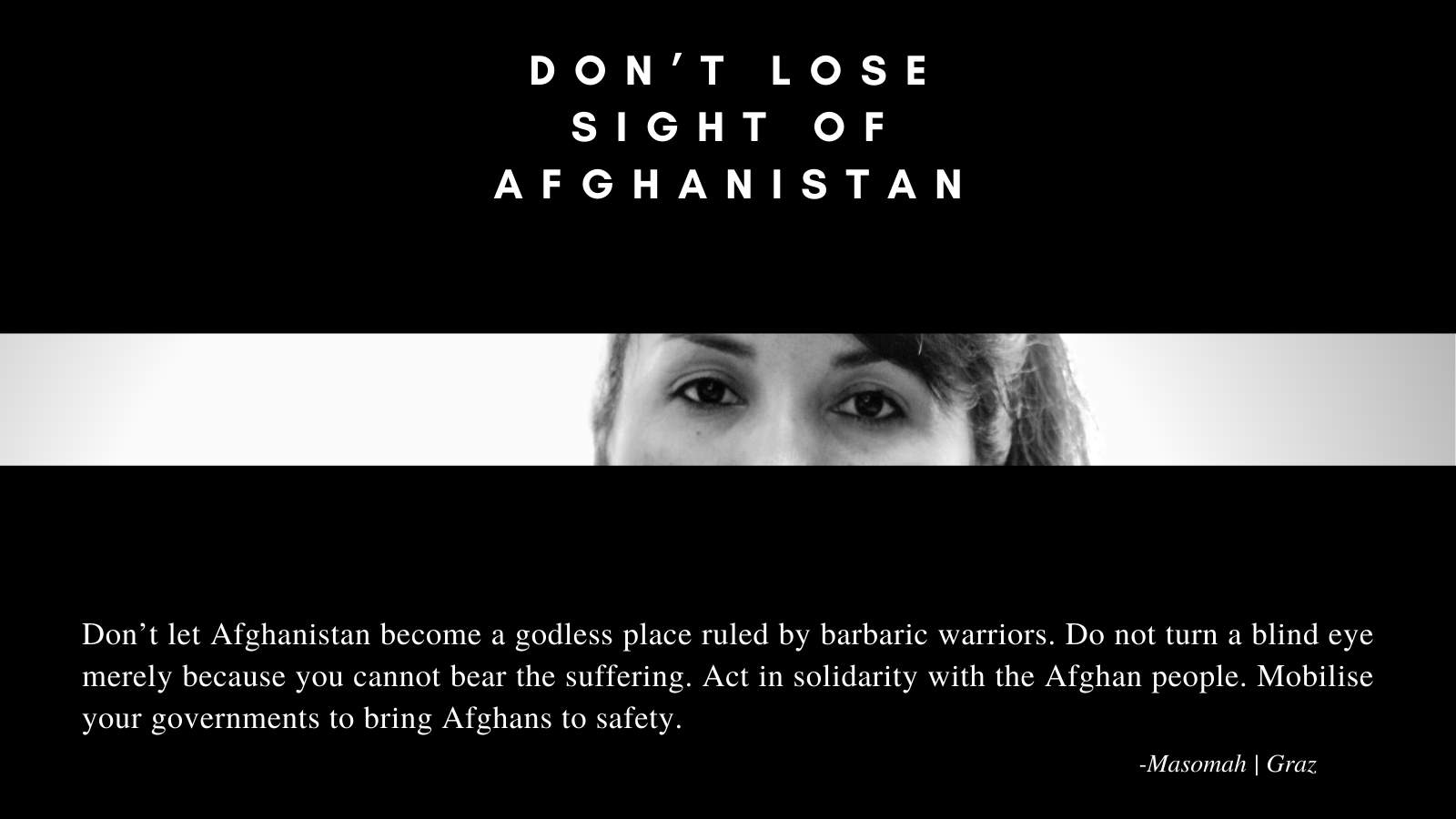 “I was born in Afghanistan into a world of destruction, hunger & suffering. Beyond this poverty and misery I have beautiful memories of my childhood. Yet at the age of 6, during the war, I lost one of my legs but gained a future in Europe. My family stayed behind. While I had the privilege of attending school in Austria my mother & siblings had to endure the reign of the Taliban. This was both a national & personal trauma for everyone. After the liberation by the US & their allies the country was able to breathe. But the joy of life was clouded by constant Taliban attacks. People will never forget the suffering & tragedy on all Afghan families. We will never buy their moderate rhetoric. Dark times are ahead for Afghanistan. An entire country cannot be evacuated but at least some of those who would suffer the most can be saved–vulnerable children & women, artists, journalists, media, activists.” 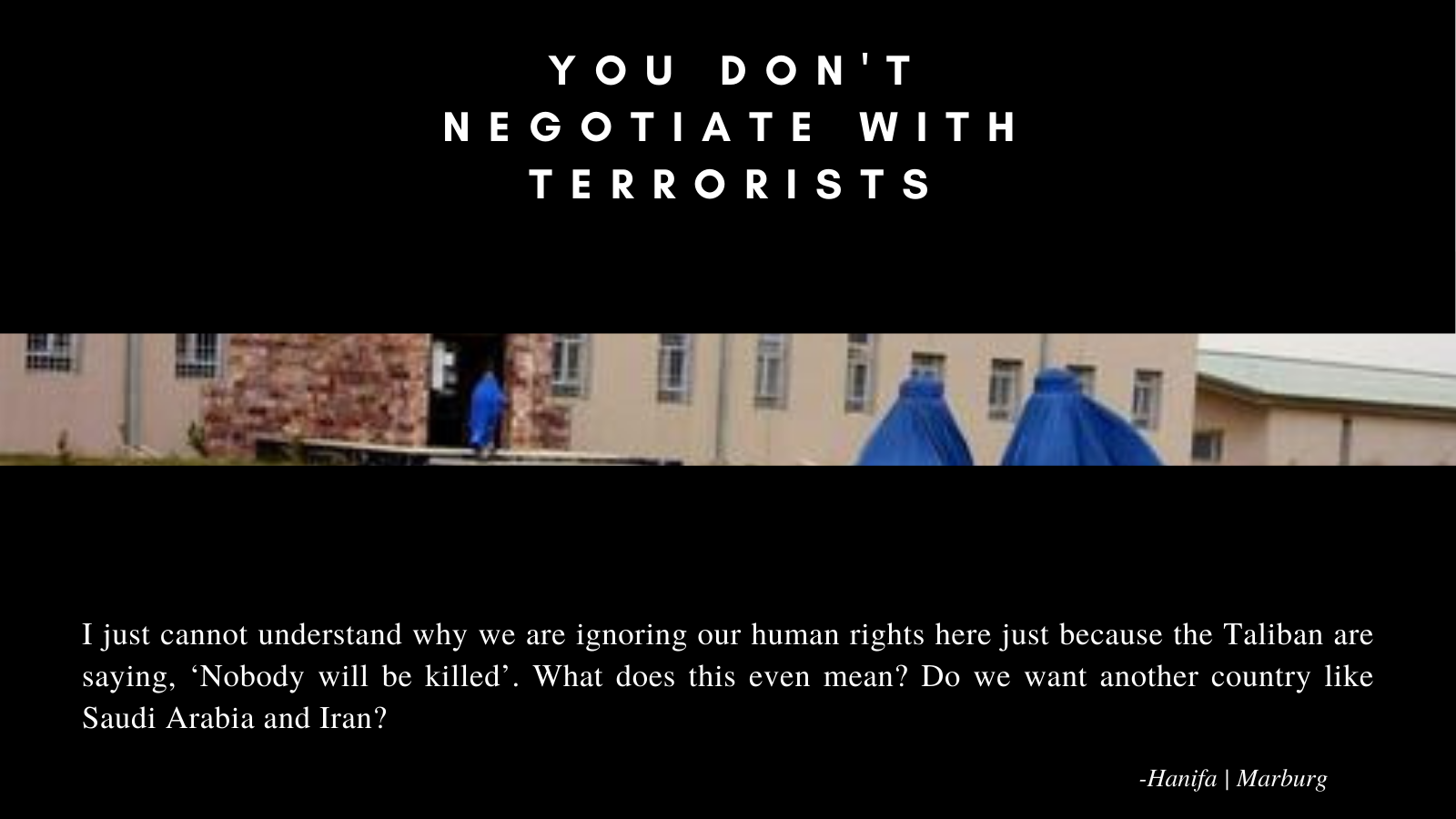 “I am concerned about the Afghan youth here in Germany. They have faced a lot of frustration & discrimination. Recruitment will happen & people will head to Afghanistan from all over the world. Young men might be thinking, ‘As a man I will be powerful there’. I have lived in Germany for 40 years but my soul is still in Afghanistan. Last week, 30 relatives of mine fled to Kabul overnight which really shows how people are living in fear. My relatives saw the Taliban entering homes, kidnapping the girls & killing the men. My message to the world: let us listen to the people instead of orchestrating press conferences with the liars. How can anyone be so naïve to think that we can trust the Taliban when they look down on westerners & see them as infidels? My position is very clear: I cannot negotiate with someone who is convinced that I am destined for hell–someone who believes he has the right to lie to my ‘infidel’ face. This summarises my experience with Salafists.” 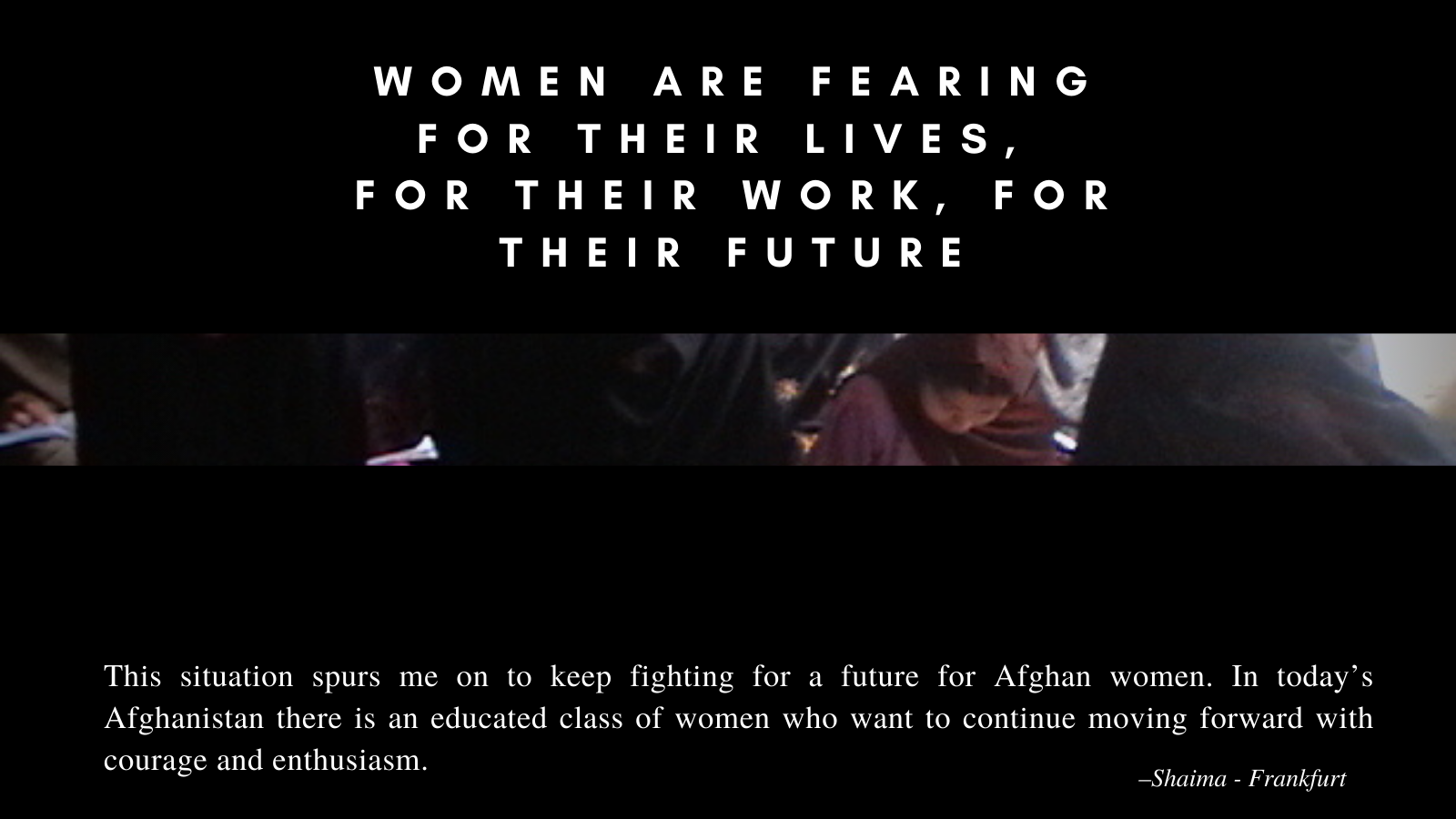 “The women in Afghanistan are very self-confident, motivated to learn, and ambitious to work. Even illiterate women have special skills that allow them to master even the most difficult of lives. Women and girls have a particularly tough life in times of war. Fear and uncertainly are a big challenge. Women do not know whether their family members will return in the evening when they leave the house. I am the fifth child and the fourth girl in my family. At 17, I was allowed to travel abroad unaccompanied and study in Bulgaria. In this way, I paved the way for many girls in my rather bug family to follow suit. When I returned to Afghanistan as an agricultural engineer, I taught at the University of Kabul.  It was my dream to pass on my knowledge to the girls and boys of my country. And I hoped to retire with a head of white hair and dedicate myself to educating future generations. But the civil war forced me to leave the country.” 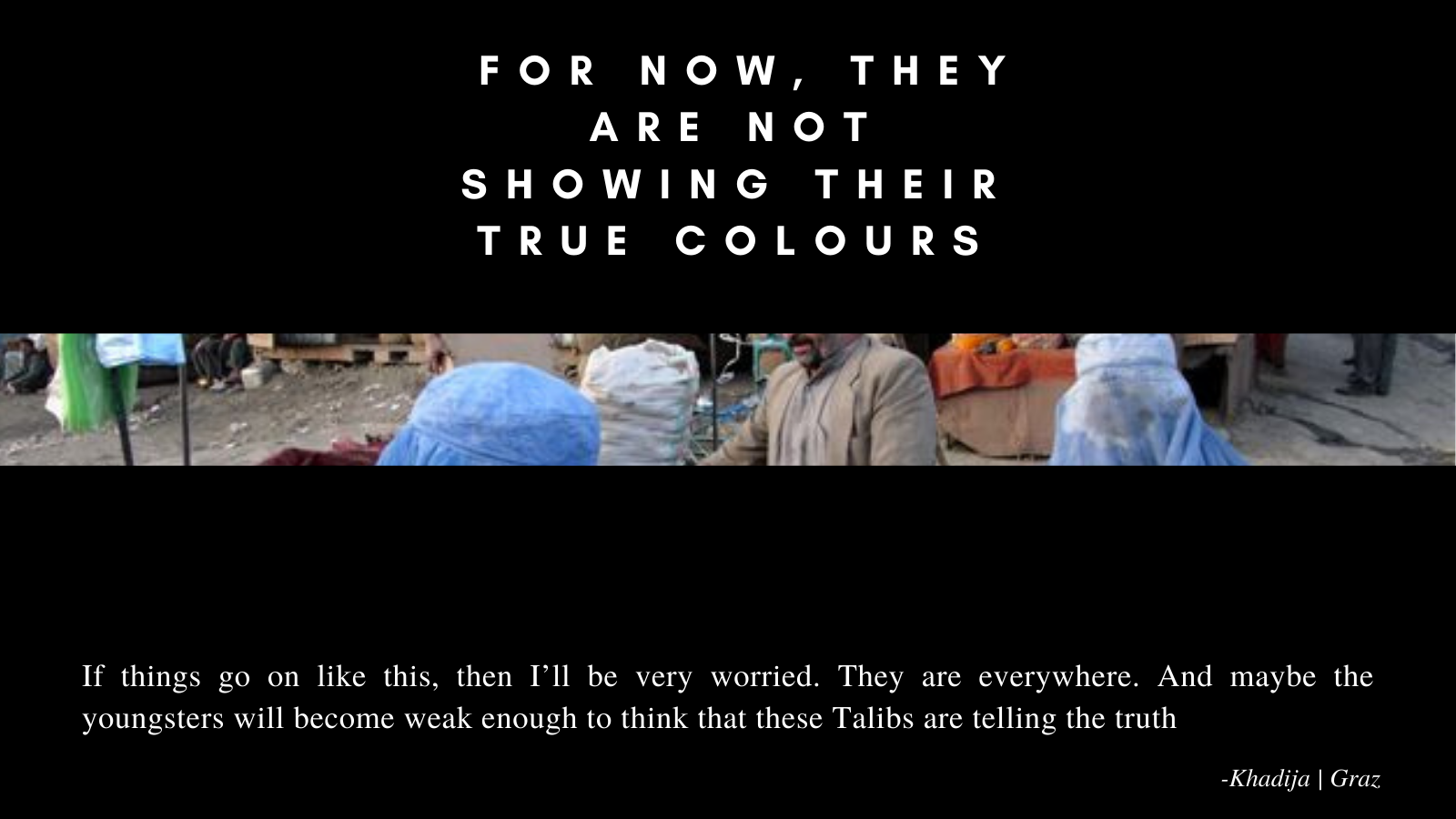 “I have only had a few quiet years in my long life. The men in my family were all in the military. My childhood was marked by death and war. My papa fought the mujahideen, my brother was shot down in the helicopter, my other brother was also killed. Like many other women, I worked in education in Afghanistan. It’s been five quiet years. When I was 19, my father decided whom I had to marry. We fled to Austria and I left a very sad childhood behind me. And now I got a message from a Talib asking for money. Unbelievable! They are even sending messages from Afghanistan to Europe. I know him from before, and I responded: ‘I’m modern woman, in your eyes a kufr—an infidel—and you would take money from me?’ If things go on like this, then I’ll be very worried. They are everywhere. And maybe the youngsters will become weak enough to think that these Talibs are telling the truth. Over the phone, I told him that all I want is to work and support my family, and that ‘Mohammad will not return to help me’, whereupon he hung up the phone.” 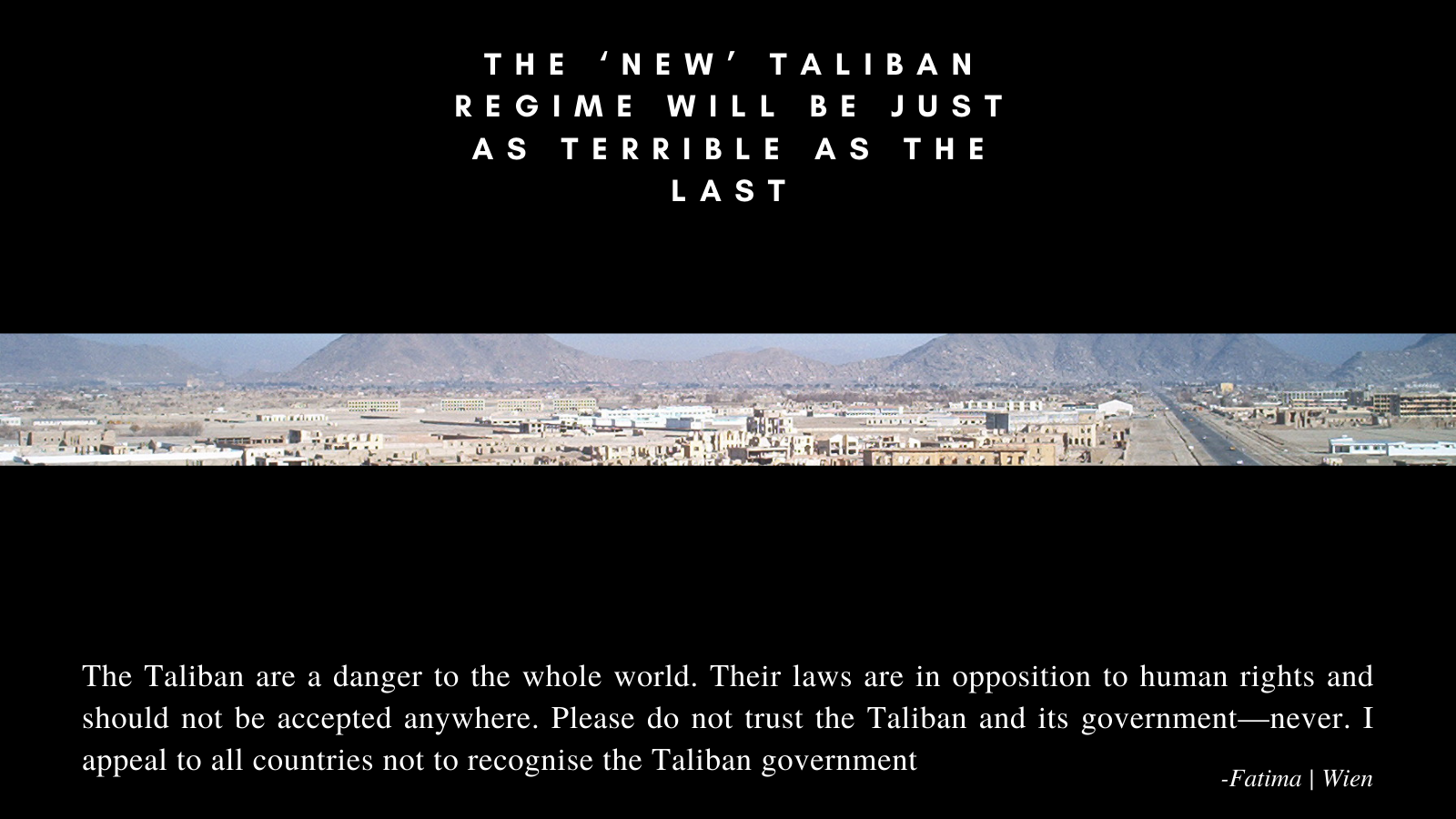 “In my childhood there was no war in Afghanistan; we had a normal life. In my youth, I worked as a police officer, but then the war came. Ever since I have been hoping and dreaming that Afghan girls and women will have the same rights as men—that they can become a part of society on equal footing. But that will only be possible if they can continue to go to school and have jobs. The ‘new’ Taliban regime will be just as terrible as the last. In their government, women will be deprived of their rights. They will be treated like property. Girls of twelve will be married off. Isn’t it inconceivable that a 12-year-old child would get married? But the Taliban are unwavering, and such are their laws.” 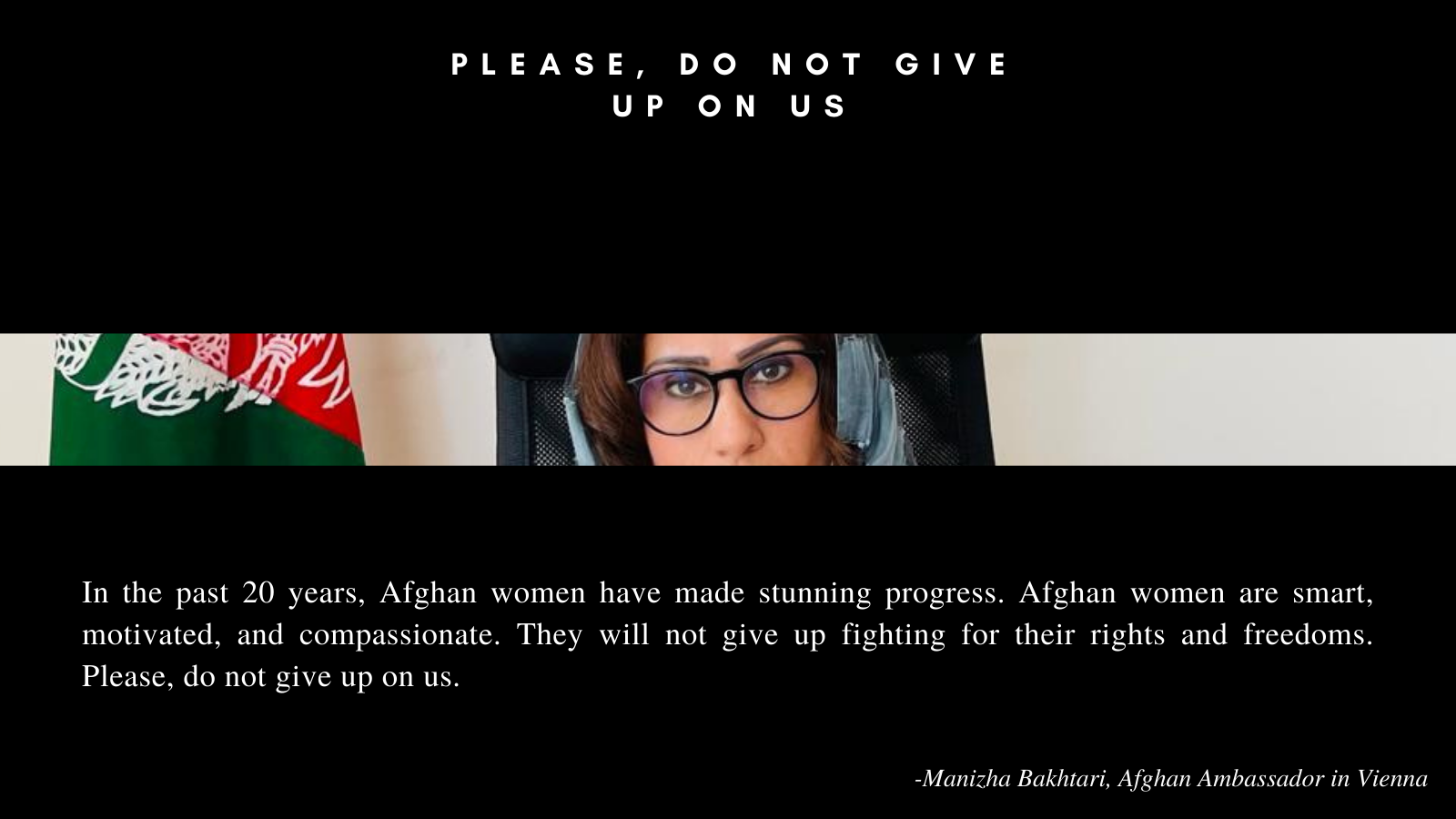 “Afghan women are not easy to discourage. This is not the first time Afghan women have faced a regime such as this. The Taliban ruled our country once before and women and women’s rights suffered greatly. Nevertheless, Afghan women have continued to build and rebuild as the Taliban attacked schools and universities and killed innocent people. Regardless of who is in control of the country, we will continue to be resilient and fight for their rights and freedoms. Though Afghan women will not give up their hope and courage, they may lose their voices, and it is up to women everywhere to advocate for their future and freedoms. Right now, Afghanistan is reckoning not just with the uncertain political situation, but also an immediate humanitarian crisis. The time for international humanitarian support is right now. Without immediate assistance, Afghans cannot sustain their lives, much less their hopes and dreams. Women in particular are the main targets of this campaign of terror. In the past 20 years, Afghan women have made stunning progress, but right now this progress is in jeopardy. Afghan women are smart, motivated, and compassionate. They will not give up fighting for their rights and freedoms. But please, do not give up on us.”