Women without Border (WwB) set up Yemen’s first anti-extremism telephone hotline in 2012. The ‘STOP Violence!’ service, which provided anonymous support free of charge, focused on the psychological wellbeing of men and women across Yemen, a nation where mental health issues are often met with shame. Financial barriers also prevent many from seeking professional psychological assistance and domestic violence is an accepted facet of patriarchal family rule. Callers received counselling and were given background information on a variety of topics, ranging from identifying early warning signs of violent extremism to coping with exam stress. The pioneering ‘STOP Violence’ hotline—a part of WwB’s Sisters Against Violence Extremism (SAVE) network of projects—contributed to eroding the silence around the taboo topics of violent extremism, mental health, and gender based violence.

In the early 2000s, extremist organisations across Yemen began to take advantage of the nation’s high rates of poverty, inflation, and illiteracy, and of its low employment levels to recruit vulnerable young Yemenis seeking direction, purpose, and stability. The rise in extremist thought led to an increase in violence against women, who in turn struggled to defend themselves against the background of traditional patriarchal structures, barriers to participating in public life, and a general societal acceptance of domestic violence. With merely 8.2 per cent of the female workforce employed in 2012, women depended almost entirely on men for economic stability. While a glaring absence of public services in general only added to their isolation, deep-seated taboos surrounding issues of domestic violence, extremism, and mental health created an atmosphere of silence. The sum of societal malaises in Yemen—ranging from a lack of social services and heightened recruitment efforts on the part of extremists—tends to come at the expense of women first and foremost, leaving the female population with a limited support network and at greater risk of being subjected to domestic violence and other forms of abuse.

Women without Borders (WwB) responded to this culture of violence against women and their isolation in Yemeni society by initiating the pioneering anti-violence and PVE support hotline ‘STOP Violence!’ as a part of its Sisters Against Violence Extremism (SAVE) network of projects. WwB partnered with local experts in the capital city of Sana’a to develop and install Yemen’s first anonymous telephone hotline for psychological assistance, primarily created to be a resource for citizens concerned about and affected by violence and extremism. WwB implemented the hotline between in 2012 with the support of the: OPEC Fund for International Development (OFID); Yemen Times, Yemen’s first English-language newspaper; and the Family Counselling and Development Foundation, a Yemeni organisation that offers community-level counselling and heightens awareness of mental and emotional health issues.

The ‘STOP Violence!’ project in large part was inspired by previous successes of similar initiatives in the Germany, Pakistan, and the UK. Acknowledging the importance of counselling and support to those impacted by domestic abuse and violent extremism, WwB combined practical, experience-based knowledge from previous work in Yemen with extensive research on context-specific circumstances impacting on Yemeni society in order to design a hotline ideally suited for operation out of Sana’a. The programme drew on trained psychiatrists and psychologists to provide anonymous counselling and advice to callers, including strategies of how to deal with social, religious, and domestic abuse. Due to the apparent causal relationship between gender based violence and violent extremism, hotline counsellors made a special effort to alert victims of abuse to early warning signs, and to inspire family-based intervention strategies for preventing violent extremism (PVE). While counsellors promoted the hotline in person by distributing flyers and posters across all provinces, Yemeni newspapers, websites, and state media services voluntarily advertised the new initiative.

Over the course of its implementation, ‘STOP Violence!’ in Yemen provided counselling to some one thousand callers. When callers gave feedback, they highlighted the unique nature of the service and positive impact that it proved to have on their lives; many reinforced WwB’s understanding of how rare psychological support across Yemen tended to be, especially with respect to information on the early warning signs, causes, and effects of domestic violence and violent extremism. This cost-free social service benefited women who had limited financial resources at their disposal. Targeted media and advertising campaigns raised awareness of the hotline’s potential benefits to both urban and rural communities. Since outreach efforts were able to reach remote parts of Yemen, a high number of callers dialled in from particularly isolated rural communities that have had little to no access to professional counselling in the past.

The hotline also helped to break down the stigma surrounding mental health issues in Yemen. Counsellors took note of how the hotline was functioning as an invaluable resource and effective tool in delivering judgement-free mental healthcare. The hotline’s counsellors explained how in Yemeni society the shameful image of mental illness runs so deep that even psychologists and medical doctors tend to reject patients who seek psychological treatment. Callers expressed feeling relieved in knowing that they could speak about their lives openly and anonymously. Counsellors benefited from the hotline in equal measures: they gained a deeper and more comprehensive understanding of the state of mental health and its connected issues across Yemen than had hitherto been possible to capture, not least due to the limited reach and scope of traditional counselling platforms.

That all calls systematically were catalogued enabled WwB to process the findings to arrive at qualitative conclusions. Whereas domestic violence proved to be the chief reason that individuals utilised the hotline, a high number also expressed their concerns about child abuse and addiction, and many called to discuss parental, marital, and psychological problems. Eighty per cent of all callers were female, most of whom had been or were being subjected to domestic violence. This reinforced WwB’s initial notion that Yemini women required psychological counselling through platforms of this kind. With countless women physically trapped in their homes by abusive husbands and other male relatives, the hotline was able to support women whom other organisations had not been able to reach. A number of women shed light on the unusual, ultra-conservative behaviour among their husbands and sons, which counsellors identified as potential precursors to extremism. Counsellors were able to educate and advise mothers in particular on these warning signs, and they shared their knowledge of how women can play an active role in preventing violent extremism from taking root in their homes. Mothers for instance learned about the various stages of child development, which gave them a better understanding of how to reclaim recruiters’ tools by investing time in, connecting with, and guiding their children during the most challenging and vulnerable periods of adolescence.

Following the hotline’s implementation, a high number of callers visited the Family Counselling and Development Foundation’s offices for face-to-face counselling. In a nation scarred by decades of violent conflict, and where less than one per cent of the population receives psychological support and no dedicated mental health legislation exists, this first step towards increased mental health accessibility benefited hundreds of callers who for the most part had no access to similar services. Through its ‘STOP Violence!’ hotline, WwB initiated a discourse around the taboo topics of domestic violence and violent extremism while affording callers from all socio-economic backgrounds and parts of Yemen the opportunity to receive otherwise widely unavailable or inaccessible support. 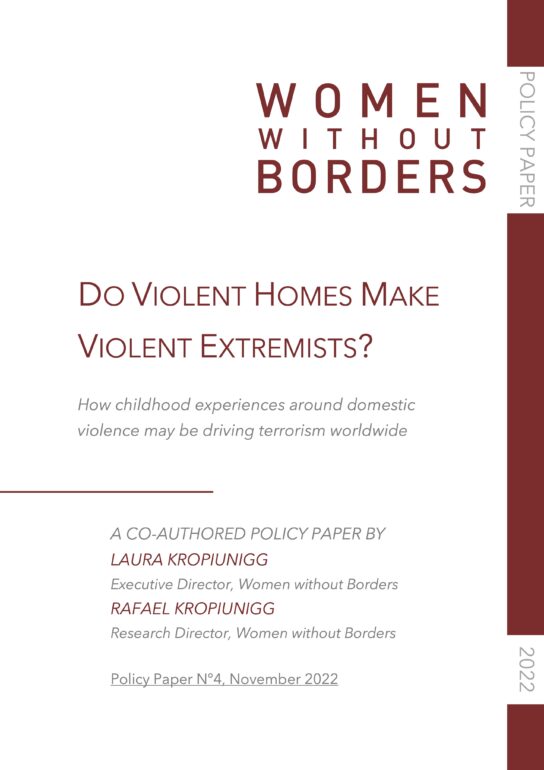